When driving east or west on the 101 around 51st avenue, a transnational architectural wonder appears. For years I’ve wondered about the temple that sits at the base of a mountain. The beige and gold colors compliment the surrounding landscape, but what is it like inside? I heard rumors that it was a Sikh Temple, and that Sikhs are the nicest people you will ever meet. I didn’t know much about the Sikh faith or this temple, so my research began with a google search “sikh temple Glendale” ah-ha! I found it! It is a Sikh temple called Nishkam Seva Gurdwara Sahib. I called the temple and asked if I could come for a visit, they said I was welcome anytime. I immediately packed my camera and headed out the door.

While driving along the highway and once again seeing the temple I’ve passed many times before, I felt both nervous and excited knowing I was finally going to see what was inside. As I pulled up and exited my vehicle, the quiet afternoon eased my nerves and the beautiful architecture awed me. I took some pictures and made my way up the steps to the courtyard. I saw people coming and going, most of them dressed in traditional Sikh clothing a few others wearing more western style clothing. I made eye contact with a woman who saw me take a picture; I smiled and introduced myself. I lucked out, as she is the reason this temple exists here in Glendale.

Saranjit Saini built this temple in memory of her late husband, Dr. Jasbir Singh Saini, a beloved cardiologist who passed away in 2000. Saranjit felt a desire to do something in his name so that his memory would live on. She began building in 2003 and the temple officially opened in 2006. Before the opening of this temple, Saranjit, like many other Phoenix valley Sikhs, worshiped at the temple in downtown Phoenix, a somewhat substantial commute for Sikhs living in north Phoenix. The temple has become very popular, seeing about 500 people coming to worship for the Sunday service. Many in the local community also visit, just as I did, to learn about the Sikh faith. Saranjit said they’ve had visitors from Canada, which I learned has the second largest population of Sikhs in the world after India. They offer an open house every year although their doors are always open and welcoming for anyone who wishes to visit. 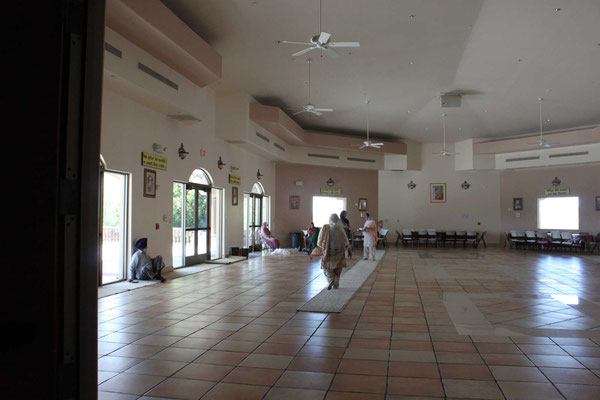 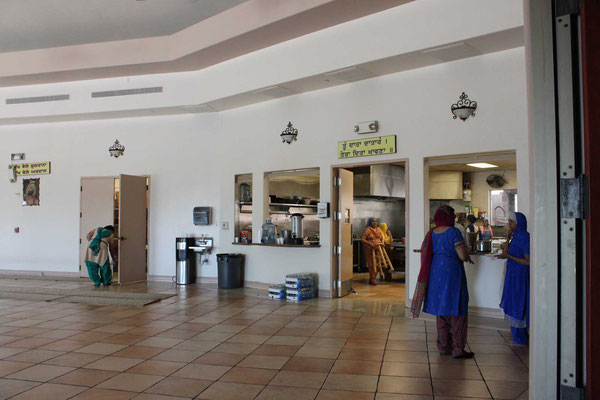 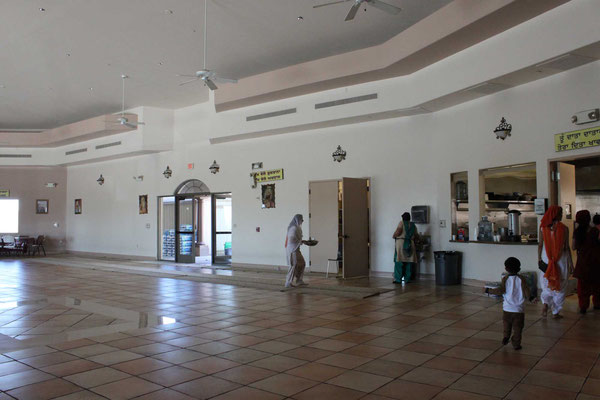 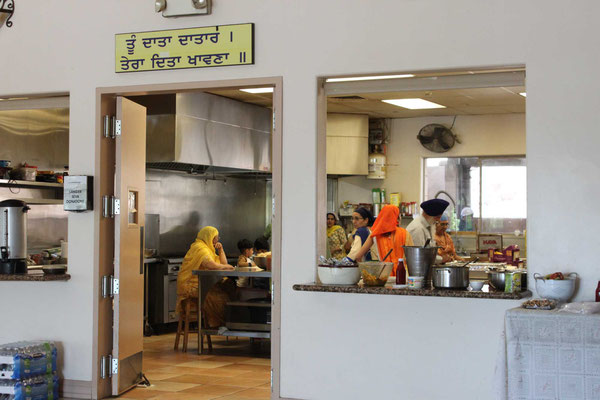 I took off my shoes as Saranjit took me inside to show me a picture of her late husband. She then excused herself, as she was very busy and sent Bell Khera to assist me with the tour. Bell was very enthusiastic and willing to show me around. Bell was born in Singapore but has lived in the United States for about 50 years now. She showed me the dining hall and the kitchen where many Sikhs were preparing food. They were currently in a 72-hour prayer period that would be ending the following day, to then be followed by a parade.

Bell brought me to the worship side of the temple, the Gurdwara, where she helped me affix a head covering, my shoes were already still off. To my right I saw a small room where a man was continuously reading aloud a prayer in Punjabi. In front of him sat a gold box with money inside. Bell explained that we place a dollar in the box, and then bow before it to pray to God. Bell said she would give me a dollar but I showed her that I had one. She said that is great because if she gave me the dollar, then it would not really be coming from me, but from her. Using my own dollar showed that I was giving this to God myself. I watched as Bell placed the dollar in the box and bow before it. I then followed suit and did just as she did. Despite being a secular person, there is something very special about being invited by another person to take part in their religious rituals. I felt very honored to be a part of this, and that is what I thought about as I bowed in front of the box. 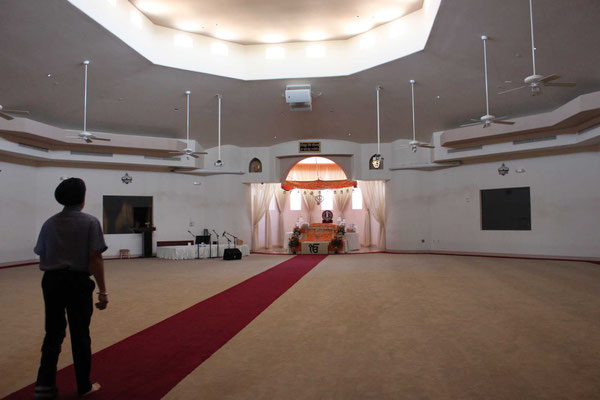 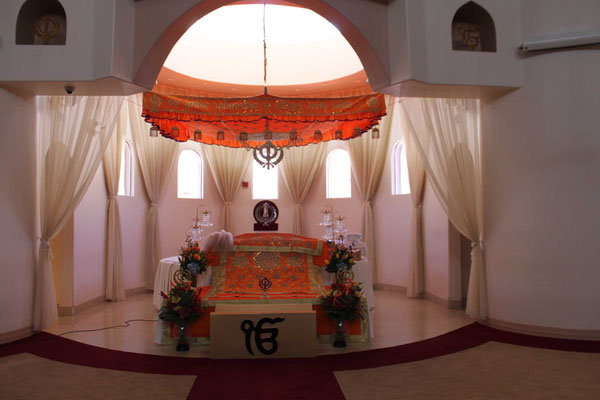 Next, Bell led me to the large prayer room. There is a line of red carpet that goes down the middle. The women sit on one side; the men sit on the other. Sitting is an act of humbling oneself. She showed me the screens that come down and project an English translation of the prayers for those born in America who have not learned Punjabi. A throne at the front of the room is where the Holy Book sits. The Holy Book is the Guru Granth Sahib, which is a book of Punjabi scriptures written by Guru Nanak and other Gurus, as well as saints from Sikh, Hindu, and Muslim religions. Bell walked me around the throne and I could feel how much she passionately loved her faith, as she would stop to bow and delicately touch the throne. We stopped at a bowl where she took a napkin and told me that this was a sweet dish that everyone ate after they were done praying, a blessing from God. I asked her what it was called and she giggled as she told me her Father called it “brown candy.” She said it was made from wheat, brown sugar, and butter. She he handed me a napkin with some of the sweet dish inside and said I could eat it later. 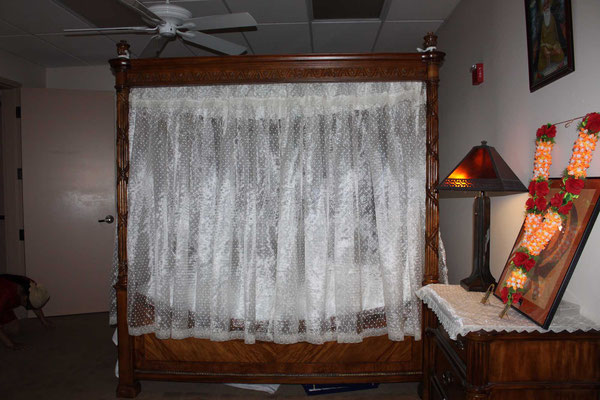 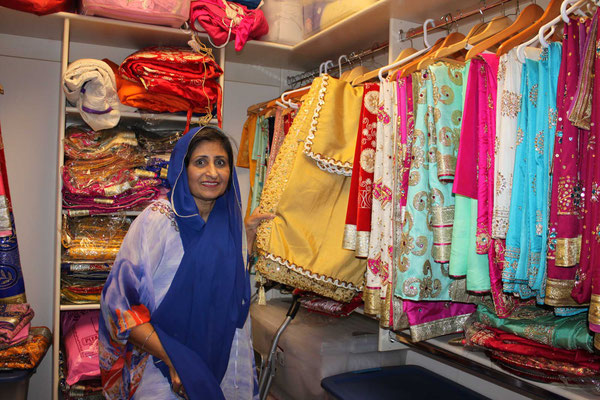 As Bell walked me into an adjacent room I immediately noticed the canopied bed. Bell explained that this is where the Holy Book rests at night when the temple closes. This is when I realized how special the Holy Book is to Sikhs. The book is treated just as you would treat a human Guru. They do not let it touch the ground and they take very special care of it. She then walked me into a large closet full of beautifully bright colored and decorated fabric. These decorative cloths are called rumalla, a Punjabi term for the silk cloth that covers the Holy Book when it is not being read. Bell lit up when she showed me the one she made for the Holy Book. As we made our way back out to the throne, she told me that their colors are blue and orange and worn during special commemorative events.

Bell had to run off so I thanked her again for taking the time to show me around. We said our goodbyes and I wandered around a bit more to take pictures and look at the history of the Sikh religion posted in the hallway. I walked to the exit, removed my head covering and headed outside to my shoes. I took a few more photos outside as I reflected on this experience.

There are many global religions seen in the valley of Phoenix. The largest population of Sikhs live in India. Canada has the second largest population of Sikhs followed by the United Kingdom and the United States. In 2013 there was a surge of asylum seekers to Arizona from India; many of the immigrants were Sikh. Many Sikhs have migrated to the United States seeking a land to practice their religion without persecution. The Sikh community in Phoenix is often making headlines for their many gatherings and open houses that promote tolerance, love, and provide education the community about their religion. In 2015 there was even a Phoenix City Council meeting that opened with a Sikh prayer.

When migrants move to a new country, it is very important that they find a place to worship and retain their religion. What a wonderful contribution to the Phoenix Valley community this Sikh temple is. Saranjit Saini wanted to do something special in her husband’s name and Nishkam Seva Gurdwara Sahib is her dream realized. The temple not only provides a unique beauty to the landscape, but the community inside is beautiful as well. All people are welcome anytime to sit and pray or meditate. My experience proved the rumors true; Sikhs are the nicest people you will ever meet.