Listen to Assyrian wedding music while you read this page!

Meet Peter and Marie Shimon. Peter came to Phoenix in 2006 after working as a physical education teacher in Baghdad for several years. He currently works as a landscape architect. Marie arrived in 2010 and is on track to complete her BA in Music Education at Arizona Christian University. They met during a church service at St. George Parish and have been happily wed since January 27th, 2017. The Assyrian community is close-knit, so they don't mind inviting not only those close but also acquaintances. Most church members were invited and thus, I was fortunate enough to document their happy moments through my Android phone.

The primary aspect that defines an Assyrian wedding from other weddings is the folk dances held. Khigga was mostly done at this ceremony. The Khigga is completed by every participant standing side by side and clasping hands, then moving along to the beat of the music in a circle. Most movement is done with the feet; dancers stomp, kick, and do light jumps in accordance to the sounds filling the room from the music playing. It is customary for the groom to lead the circle, and to hold a staff of some sort in his free hand. Here, Peter can be seen doing that, with his uncle and niece following his lead.

The Khigga tends to be ongoing, hence there are times when people need to leave the dance to take breaks and rest. Therefore, the order can change. However, it usually does not go on if the groom stops dancing and no groom wants to stop the fun for everyone. Of course, the wife cannot let her husband dance alone the whole time. So, wedding nights are times to dance the night away and wake up the next morning to aching feet.

Another aspect of Assyrian dance is for people to bring decorated handkerchiefs, called Yalikhtas, and use them as they dance. Usually, Yalikhtas are composed of smooth silk or shiny organza. The edges are lined with beautiful iridescent beading and pearly long sequins, so that noise is made as they are wrung and moved about in the air. It’s another method to voice excitement over the union between the bride and groom.

It is optional for Assyrians to wear traditional attire during celebrations. Feathers adorn felt caps during lighthearted times. Deep and red hues are most common for the base of the fabric worn and are accentuated by intricate floral or diamond patterns. During Peter’s and Marie’s wedding, one can see multiple people opting to wear the traditional clothing. Assyrians tend not to wear this type of clothing in public throughout everyday life, so weddings and other festivities are the few times when they get to go to the back of their closets and pull out the outfit to feel one with the past. 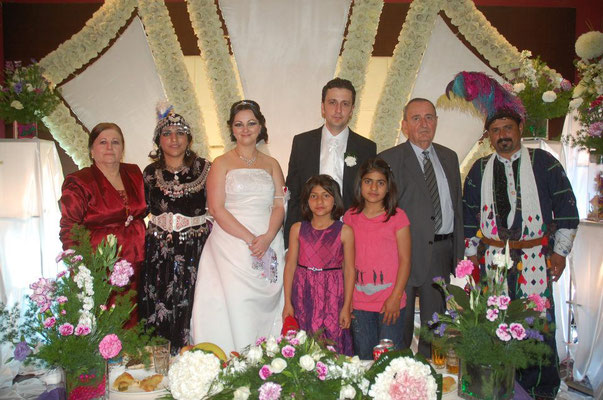 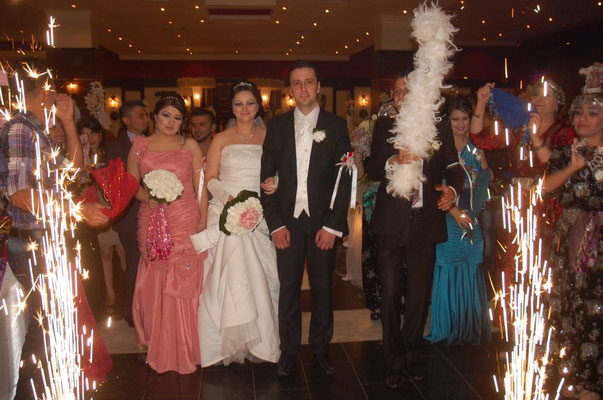 Towards the end, things slow down and a couples’ dance takes the place of the Khigga. One can see Peter and Marie dancing next to Peter’s brother, John, and sister-in law, Joyce. John has opted to go with a more modern look, unlike his wife, Joyce, who has opted to go all out for this event.

Naturally, no wedding would be complete without a final family photo.

This wedding for the Shimons was a relatively close-knit gathering. Out of the people invited, approximately fifty people could make it. Weddings are huge milestones in Assyrian culture. Peter still has a sister living in Iraq and Marie’s parents live there as well. While they were disappointed that it was not possible for them to attend, they did enjoy their wedding and await future events when those relatives will be able to be there in person after coming over legally to the United States.