The passing of language from one generation to the next is not only important for the sake of communication, but also for the passing of one’s culture so that it can live on for years to come. I entered one of the small classrooms within the church I attend, St. George Parish of the Ancient Church of the East Arizona, with this in mind as I mentally prepared myself to be surrounded by eight to ten-year-old students. My church has a wonderful program to educate Assyrians like myself on how to write and speak Aramaic, our native language. However, this program is primarily held for children, thus I did not attend as I grew up in Texas during my earlier years prior to moving to Phoenix. This was my first opportunity to sit down and observe the class.

At 9:00 AM, I was the second person to enter the classroom. The first, I soon learned, was a volunteer modern Aramaic (Assyrian Neo-Aramaic) language instructor named Noelle. Class was not to start for another thirty minutes. However, Noelle was kind enough to educate me on how the class was run and even gave a little background on herself.

Noelle is originally from Iraq and came to the United States in 2004. Her mother came in 1999 and father arrived in 2000. Everyone came through the refugee process. She went to school in Baghdad and holds education in high regard, believing it is important for young Assyrians of today to understand the past. She mentioned how every time the kids walk in, she will remind them of how much easier they have it in contrast to the Assyrians growing up in rural communities of the Middle East years ago. In her own words, “The children growing up in the United States are not growing up on only bread, water, and faith- they are blessed with much more than they need”.

I knew exactly what she meant as my own parents often tell me stories of how they lived in villages and the electricity would cut out, they needed to walk miles just to attend school, or how their own parents did not have running water and had to dig their own wells.

Noelle continued to mention that “despite having more than they need, children here lack knowledge of their past” and this is tragic “because a piece of history is being lost”. I agreed and am in some ways guilty of this myself, if I am being honest. Though, I did not inform her of the latter part. Then, students started filing into the room and took their seats. I did too.

Noelle’s love for education shows, through her enthusiasm. She greets them all with a smile and takes attendance right away. Even cracking a joke here or there, giving “they did not do their work, so they were nervous to show up” as explanations for the absent children. The class laughs and the mood is bright and relaxed.

However, the teacher then asks for everyone to take out their homework. The air becomes tense and students fumble through their backpacks, trying to find their spiral notebooks where they transcribed stories as grammar practice from their assigned books. Here is an example of the story and two entries which received the full amount of points: 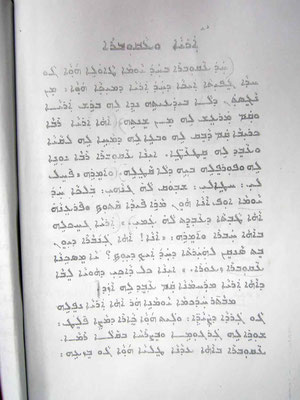 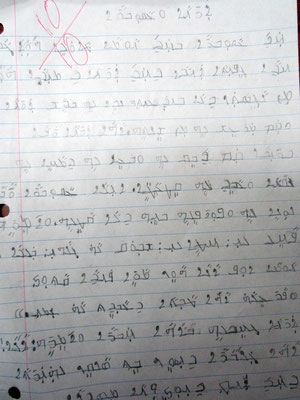 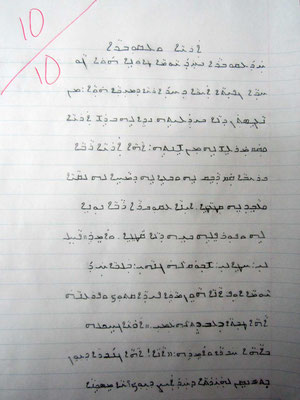 I did not have the heart to include photos of the homework with lower scores nor did those children want me to take photos of their work. When I asked, they only turned their heads away in shame and their faces lit bright red.

Noelle congratulated the students who received perfect scores and the group transitioned to discussing the story assigned. It was called “The Ereya and Aqoobra”, which translates to “The Lion and the Mouse”, one of Aesop’s fables.

She began this part of the session by stating a section of the story and having the children repeat after her. Then, she provided some clarification of the characters, primarily the mouse, even throwing in a Tom and Jerry reference during a certain part:

After, Noelle had the children each take turns reading sections of the story. Here is a clip below of where the children read the sentence “One of the days, the lion fell into the hunters’ trap”.

This continued sentence by sentence until the class had read through the entire fable. A summary is as follows: A lion was saved from a trap after a mouse gnawed it to bits. He had spared this mouse prior, so the small animal’s ability was a pleasant surprise.

The class ended with the moral of the story stated by Noelle, that “No one should judge by appearances and everyone has a purpose that makes them useful.”

I could not help but think that this moral extends well outside this children’s story told in a language class. It’s also true for all people coming to this country. We’re all from somewhere, whether the migrant be ourselves or a relative who came before us. We all have a purpose and talents to contribute.